i cooked again! because i had to. well, because i felt like it.
or most probably because my brother dropped by on a Saturday night and he was too lazy to get takeout pizza LOL.

well anyway, i made this. as usual recipe came from one of those Tasty videos on Facebook. 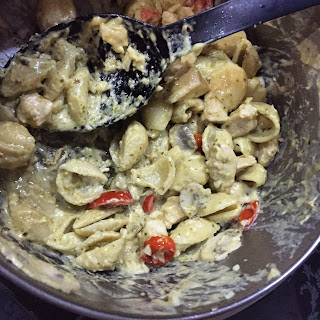 
1. Heat the oil in a pan. Combine the chicken, garlic, salt, and pepper, and cook until chicken is browned.
2. Mix in the heavy cream, parmesan cheese, and pesto, stirring until evenly combined.
3. Bring to a boil and cook for about five to seven minutes.
4. Toss in the pasta and cherry tomatoes, stirring until evenly coated.
5. To serve, sprinkle parmesan cheese and basil on top.

i substituted penne pasta with shell pasta because i wasn't really a fan of penne, but i didn't expect the shell pasta to be so huge when cooked. and i totally skipped step #5 because i served it directly from the pot bahahahhaha.

Dinara eats anything i make. my brother said it lacked some greens, but i didn't know what sort of greens i could add into the recipe. my brother-in-law enjoyed it but he sorta balked when i said i dumped in parmesan into the mix. he eats clean these days, lol. the husband as expected didn't like it, he's more of a bolognaise fan when it comes to pasta.

but nothing beats rice! on Sunday the husband lost his mind and ordered fish! he never eats fish. if he does, he'll only eat 1/18th of the fish, and guess who's the lucky person that gets to finish the remaining portion? =D~~~