Acap and Ida finally got married! 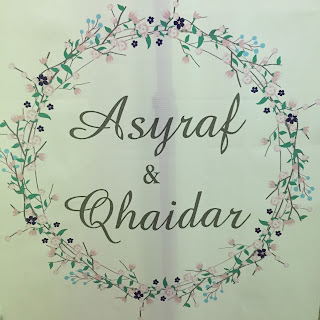 i thought we arrived late, but we happened to arrive just as the newlyweds were about to enter the hall. i didn't have time to attack the dessert table, but i did manage to grab a mini pavlova before we were ushered into the hall, haha.


when i got married many light years ago, we didn't have the luxury of putting technology stuff onto the dulang save for digital cameras, along with the usual Quran, fruits, matching watches, toiletries, telekung, shoes, stuff like that. nowadays got so many choices! iPhone lah, iPad lah, i think they would have put the PS4 console onto the dulang if someone didn't the mind carrying the weight around, ahahahhaha. that's actually not a bad idea... you get the guy PS4 games, then ask him to go buy the console himself, lol lol! women's handbags also.... years ago Coach was considered a luxury. now it's LV this and LV that.... coach, say what?


i have to say the food was super awesome.the rice was ohsem, the ais kacang was ohsem, the laksa was ohsem... no lie. they had food stalls scattered around the hall, you just have to pick what you want. i'm getting hungry just typing about this.


much has changed in the past 2 years.


i guess you could say we should thank Aviax for allowing our paths to cross with these bunch of amazing people. hahahhahahaha. i wouldn't be friends with them if it weren't for that (and if weren't for the husband going through midlife crisis so early in life haha).


have you heard of Prisma? the app itself is slow in rendering, but otherwise the end results are pretty impressive. Pandora lovers love to use the  Mosaic effect on their collection, it makes everything look extra shiny and glassier, it reminds me of those jeweled glass windows you see in cathedrals (specifically i'm reminded of Beauty and the Beast haha).


and this one... i don't remember what effect this was. the app is soOoOo slow that by the time the effects were added to the photo i've forgotten what i had chosen *roll eyes*.