we took the three elder kids to watch Beauty & the Beast last weekend. i enjoy bringing the elder two for movie runs (despite asking me to bring them to the washroom during the movie! grrr), their concentration is Ace compared to my 4 year-old, whose ability to sit still in her seat for two solid hours is dependent on what kind of movie we were watching. the only movie in which she sat still with her eyes glued to the screen was *you guessed it* Trolls. Sing pun kalah.


the movie:
Emma Watson played the part of Belle well, but in terms of her singing voice, i feel like she's limiting herself to within her comfort zone, you know? she's no Paige O'Hara, but that's ok. plus points because she's pretty =) i like how they actually expanded on the story-line. at least the movie made a bit more sense compared to before, haha (when you're a kid, who cared?).

i don't recognize who plays the Beast though, so sorry =P

the best character goes to: Gaston!
i'm not kidding. Luke Evans had the whole character down to a T. from the way he swags to the way
he dresses. plus points because he can actually sing, due to his theater background. the extension of 'Gaston' was superb. i never did like the character, but Luke Evans made Gaston worth an extra 5 minutes of your time =D. too bad he still had to meet his demise in the end. he would've made a great character for a potential movie sequel. perhaps a prequel then? (think Star Wars, dunn dunn dunnnnnnn~) 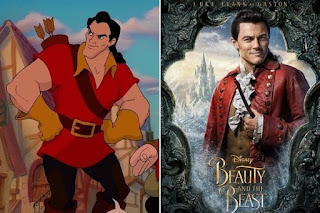 the soundtrack:
i really didn't fancy the soundtrack remake of Beauty & the Beast, sung this time by Ariana Grande and John Legend. i'm not sure why, but it didn't sound and feel as classy as the original by Celine Dion & Peabo Bryson. the song's rhythm kind of reminded me of the tempo beats that you can preset on an organ, if you get my drift (i'm sooOo a piano person). the song sounded a bit flat compared to the original.

i guess i'm so into the songs from the original movie that some of the cuts made in Belle didn't really go to well for me. like when they omitted the 'Marie, the baguettes, hurry up!' part. or the part where Belle went to return the book she just borrowed, they changed the entire conversation exchange completely. that part felt a bit off - must be me i guess. but yeah they can't direct a sheep to eat the page of Belle's book at the water fountain, so it's all good. you can't replicate everything, can you? LOL

Days in the Sun and How Does a Moment Last Forever must be two of my favourite songs from the soundtrack though. they brought in Celine Dion to sing for the soundtrack! *major love* her vocals haven't changed a bit since 1991. and i'd know Ewan McGregor's voice anywhere (from his singing days in Moulin Rouge).

you know who got the best of both movies? John Legend.
her got to act in La La Land and cut a song for Beauty & the Beast.
sweet!
from my rose garden, E`n1x at 1:43 PM