my little girl has finally graduated kindergarten! i'm feeling anxious right about now... T_T who's the one that's entering primary next year - me or her? she doesn't seem too worried about entering a new foreign school all on her own -___-

being the busy PA secretary that i am (lol), i landed in KLIA right about noon. the pilot had to complete another two sectors, so i got my brother to pick me up at the airport and we headed straight to the venue. this year they decided to hold the graduation ceremony in the afternoon. i hope next year they'll split the event based on the children's age. we had to sit through every single class performance before the graduation ceremony actually began. not that i minded, but there was no food and drink available and kids got cranky after awhile. for that reason D3 and E1 was left behind.

at the last minute i realized that Dinara had to wear a black headscarf that day, since she was going to be a soldier for her school performance. unfortunately she doesn't own any save for pink/lightblue/yellow. she most definitely couldn't wear those colors, what kind of askar goes to war wearing pink??! hello, camouflage?

thanks Shenz from @onulaa for helping me out at the very last minute =D. despite me not knowing which hole her head was supposed to go into *laughs*, it definitely was a much neater wear than the headscarf i made her wear last year, i forgot what brand that was from. 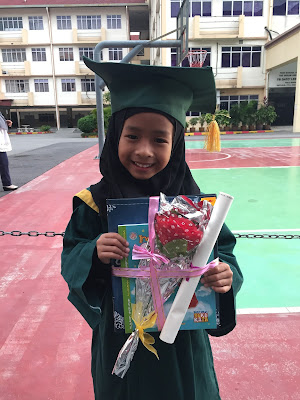 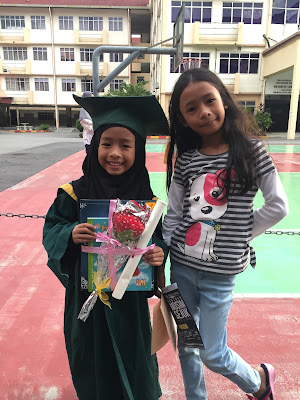 the pilot finally made it just about the time the graduation ceremony ended. she was so excited to take photos, haha. and she waved to most of her friends walking by, most of whom i do not recognize because they didn't come to her birthday party last August. thanks Abang for helping me out today =).


next year D3 goes to kindergarten. and i'm going to have a massive headache trying to organize getting three kids to school, especially with the different morning / afternoon sessions. huargh.
from my rose garden, E`n1x at 11:54 PM