remember this bundle of happyness? 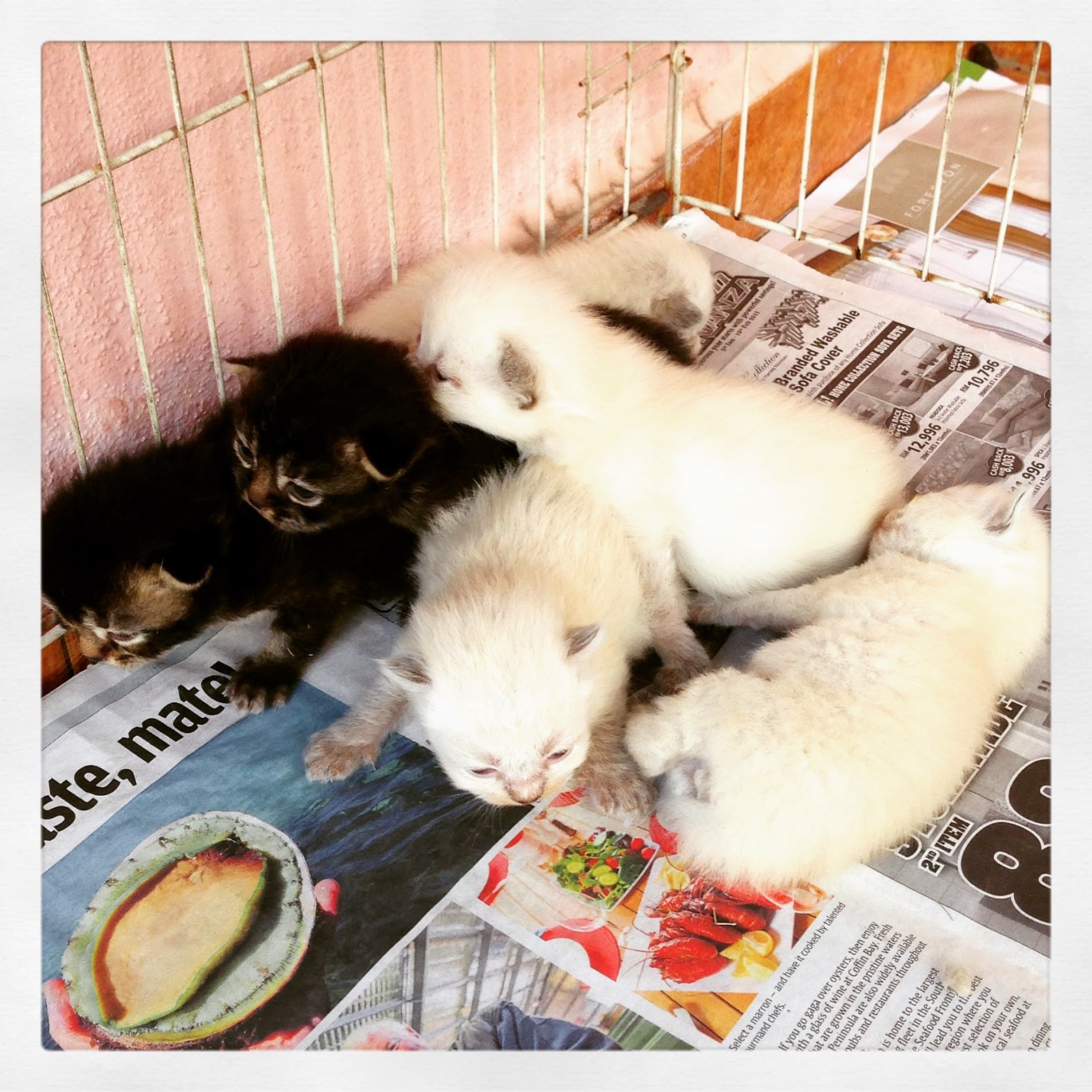 i don't know whether this Mommy cat meant well or is clearly a psycho in disguise.
guess how we spent our Saturday night?
hunting for kittehs. lol. yep. you read right.

bibik thought the kittehs were big enough that Sparky wouldn't bring them elsewhere. so she brought them and the cage back upstairs and kept them at the balcony where Sparky and Oatsy always hung out (they're rooftop cats if you may lol).

come midday, three of the kittehs were gone -_-. Sparky must've brought them to the other side of the roof. bibik scolded the cat and ordered her to bring back the three (hahaha you should've seen her ordering the cat aound, you think the cat will even bother listening to you? lulz).

and by the end of the day, the remaining three whites disappeared. haiz... not good. bibik tried scaling the roof to look for them, but there was no sign of any of them. until they heard a mewing sound - down the pipe. you know those pipes that drain rain water from the roof to the main drain outside the house? yep. the kittehs got stuck in there. haiz. even the husband (as annoyed as he was, he' a softie at heart =P) (ok don't tell him i said that) climbed onto the roof and tried his hand at rescuing the kittehs. but they couldn't even stick their hand far enough down the pipe, what with it curving and going downwards.

since we deduced that the only way the kittehs could go was down, we tried sticking a water hose down the pipe with hopes that the kittehs would be 'forced' along and they'd follow the pipe downwards and out the other end. while the husband was sitting on the roof sticking a hose down the pipe (with Sparky kepochi the whole time), the bibiks were outside at the main drain trying to peer into the main pipe to see whether the kittehs would end up at the other end.

miraculously, bibik could glimpse the cats in the pipe (smart kittehs they were! i'm impressed), but they were still quite deep inside the pipe to grab. omg you should've seen everything. what with everyone meowing away into the night, even the pakgads dropped by to see what the fuss was about. eventually bibik managed to get the three wet (and probably starving) kittehs out, poor things. we stuck them back into their cage and forced Sparky into it as well.

we couldn't find the other remaining three kittehs at first, so everyone suggested to dump water into the pipe to flush them out. by then there were no meowing sounds to be heard. the husband even had the idea of vacuuming the kittehs out, haha (we didn't try that though). we deduced that since the last three kittehs disappeared later than the earlier three, they might need time to make their way down the pipes, so we waited the next morning to continue searching.

the next morning the husband had this idea that maybe Sparky decided to put the other three kittehs on the other side of the roof, and he was right. luckily for us those three didn't think of going down the pipe. bibik took a ladder, scaled the roof and found the remaining three all safe and accounted for, phew. probably after realizing her three kittehs went missing down the pipe, Sparky decided that it wasn't a great place to keep her kittehs after all T__T. stupid cat. i find it weird however that the last three kittehs never made a sound throughout to indicate their whereabouts.

so back downstairs they go until they're old enough to be ignored by their mother. pffft. i'm just glad that they're all safe n sound. you see why i have a love-hate relationship with cats?

so... back to fluffyness: