ok so there's no such word as 'mevent'. but i couldn't resist =P

i had a happy weekend despite having those fake contractions thingy (which i think i can now know when to expect whenever i carry out a certain activity).

Saturday:
attended Nadia's son's akikah. only stayed awhile because i really really really really wanted to lie down instead of sitting. and Dayana insisted that i carry her or she sits with me (which is getting to be abit more impossible each day since the watermelon is getting bigger). imran is sooo cute! and the food was nyum nyum. wahhhh i wish i could tapau the food back =P. Significant Other enjoyed the cream puffs, he sapued the entire lot on the tray. the trifle was good, but i think Aunty Oya's trifle that i had the other day at Miqa's party was even more superb. lol! 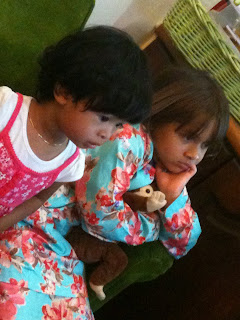 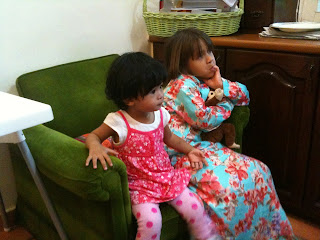 i received my XT today too! cantiks irl. didn't come with chest straps though =(. was thinking if i ever do need one later on. this will merely be Dayana's carrier anyway, and i think i'm happy doing back carry without them. it doesn't look too pink irl even, despite looking very hot pink in photos. gah i so want a purple carrier, but i'm still leaning towards red. how larr? =P 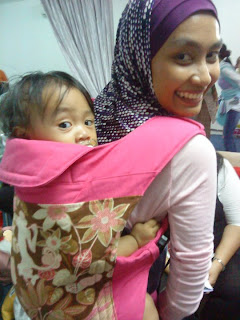 lix modelling the pretty-irl carrier =D
sakit2 pun sempat lagi go the the MBW gathering at TTDI. my last gath before i'm able to join those peeps in a while. but i was late to attend, balik2 from rumah Nadia Dayana decided to go for her evening nap, and i guess i kinda did the same =P. no pics from me because i didn't even try any carriers except for Far's J (which i love to bits btw) but Dayana managed to get into a group photo, thanks to Ito, kekekeke. loved the samosa to bits btw. i guess i'm currently craving for samosa now. my first taste of samosa was when i was in Mekah, hahaha if you can believe it.

borong stuff at Fabulous Mom before going back (i didn't bring my voucher, so i didn't get extra discount, benciiiiii): some storage bottles, milk storage bags, a nursing nightie, and a pair of baju kurung by Sarakids for Dayana, since i don't think i'll have time to hunt for her baju raya later (btw, i remember sending an enquiry to Sarakids about their baju kurung collection, i think that was about a year ago and i still never got any reply, tsk!). anyway, Dayana managed to create a mess at the showroom, so i guess i felt a little bit compensated =P (Sarah told me later that she saw a lot of the vouchers lying around during the gathering earlier, tsk).

Sunday:
attended Auntie Yaya's (my sil) birthday bash at KFC Subang Parade. dropped by Empire first to get her birthday present. i think it's cool that we get to park for free at our condo whenever we drop by Subang Parade =D. she's only 10 but she's not into Barbie's and such, and more into arts and crafts. i bought a singing stuffed Barney doll for Dayana. earlier that morning she insisted i repeat the same 'I Love You' song on youtube which unfortunately ran for only 1 minute @@ (bila youtube mau ada itu ripit function???) so now she has her own Barney to sing for her instead.

oh oh i managed to get Significant Other to babywear Dayana using Pah's PTDC, lol. i knew that Dayana would be running amok when we get to Toys R Us so i just told him to wear her so that she can't run loose and we could just drop in without much hassle. hehe. although she did get agitated during checkout time. she got bored and wanted out. 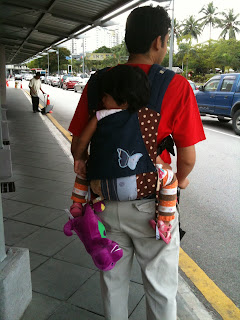 pah's ptdc! hehehehe
after the party we left Dayana with Auntie Enn and headed back to Empire, i wanted to try Whisk's red velvet and macaroons that people kept saying were absolutely tdf. the store was actually really tiny, with a nice cozy oldies feel to it. i must say the red velvet was nice, not too sweet (in my last trimester i noticed i am sooo not into sweetness) but the macaroons were... er... blergh? i dunno la. they look like mini burgers, but one bite of them will errupt into total sweetness. arrrggghhh. i got a headache after my first pink macaroon. hahahaha. i don't think i'll ever understand the craziness over macaroons. are you supposed to pop the whole thing into your mouth? i ate them like a mouse nibbling on cheese (heck i even eat my chicken nuggets this way). 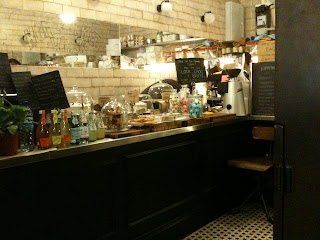 u gotta love Whisk, i heart their cozy concept 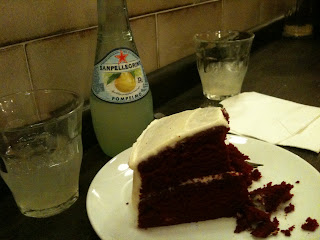 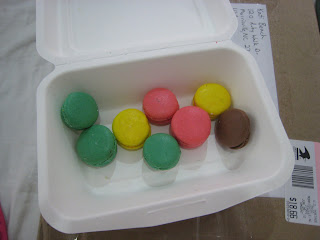 macaroons yg manis nak mampus. only the choc one boleh tahan imo
met a friend of Significant Other's on our way out. i must say this is the first friend that looks younger than Significant Other, even though they were the same age, lol. Significant Other sungguh tak puas hati at my statement. kekekeke.

we headed off to Subang Parade. surveyed Doodolls for Auntie Enn's belated birthday present since she's a big fan of those weird looking stuffies. since the Doodolls collection was huge, we deduced that if we bought her one each year as a birthday present, she'd only be able to own the entire collection by the time she reaches 40. hahaha. Significant Other bought a white fluffy hippo! =D (but i wonder if he bought it just for me, or he bought it for nostalgia, tsk).

dragged Significant Other to Mothercare to see what's for sale before the sale ends. what i wanted wasn't available at the Subang Parade outlet though =(. but we did incurred damage there. bought a cable blanket in a smaller size for the new baby (i will not have baby #2 drag around the blankie as what Dayana is doing now, no no... i'm planning to survey Taggies instead =P) Avent bottles (Significant Other's eyes literally popped out when i mentioned how many bottles i needed) and some bath towels. after ringing up the purchase i just realized that we must've spent a bomb for Dayana last time. this time around we're lucky most of the things can be recycled. huhu. i also bought a pair of nursing bras too. although i'm not sure if it makes a good fit... is there a way to make the bra diameter smaller? i only know you can use extenders to make it bigger, haha.

last night i think i woke up more than 5 times to go to toilet. haiz. i'm reaching the stage where it's almost impossible to get a peaceful sleep. 33 weeks and counting! arrrrggghhhh...

i am soo not prepared. the bad thing about going through labor a second time is, you already know what's going to happen. during my first time at labor i didn't know what to expect, so the anticipation anxiety wasn't there. aiyo - and you'd think we'd be more prepared for the second time. the only thing i might improve at is what i should pack in my hospital bag, AHAHAHAHAH.

Where do u get all the energy?? Kalau i, tidur lagi bagusss.

the best part about having a new kid is naming them.... hehehehe...