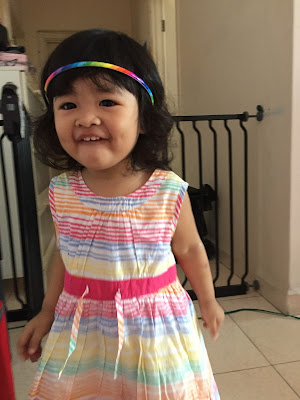 at her current age (shy 3 months to her 2yo birthday) she seems to have picked up on some interesting habits and a bunch of interesting words. some being:

2. dedek
spoken while poking at the refrigerator door. probably means 'there, there', or something, i don't know. i don't even know where she got the word. but it means she wants something specific, and she wants the milk in the fridge. giving her plain water just won't cut it.

3. she drinks fluids in a cup, yay! except that you can't fill up the glass too much, else she'll start spilling all over herself. uh oh. let's hope it'll be easier to wean her off the bottle compared to D2 and D3.

4. MORE?
more more more - means she wants summore. summore of whatever she's eating at the time. she reminds me a lot of that flock of birds in Finding Nemo, where they kept chanting "MINE? MINE? MINE?" nonstop. well, for Ems, replace MINE with MORE, and that's how she says it. hahahhahaha.

5. ba-ba
what she calls those toy Trolls figurines that we have. i also have no idea why she calls them as such. we keep telling her TR-OLL but she just comes back to "baba".

7. sees a photo of her sister and says "kakak" in a hevaily pronounced k accent. lol.

9. shishi!
i kept trying to teach her the word 'shy-shy' during bath time ("eeeee shyshy!!!!!!!!")... but she sort of distorted the word to 'shishi'. hahahahhahhaha. she randomly lifts up her blouse and says "SHISHI!"

10. dedis-sheh!
i don't know what this means either. she keeps pointing at random stuff and utters the word. daddy punye, kot?