when you didn't think the day could go any worse.... this happens!

a Good Samaritan was the one that actually made me aware of the fact that i had a flat, else i wouldn't have noticed T_T. it was the day fil was due to arrive at KLIA that evening so i was in a rush to leave, i was already half way out of the parking lot. fortunately there was a bit of a space for me to park my car without obstructing traffic flow.

so i stopped to take a look and found that the back tyre of the passenger side was indeed flat T____T.

i've never attempted to change a flat tyre on my own, the last time that happened i managed to bully Ashwin to help me replace it in the parking lot (he did all the heavy lifting, ended up drenched in sweat and how did i repay him? with a teh tarik hahahahahha #forevergrateful). i wanted to try driving all the way to Old Klang Road to a random workshop for a temporary fix. but it was rush hour; i didn't know how far i could risk driving the car on a flat before ruining the tyre completely, even after Mashi offered to accompany me.

so i called the husband. did you know that if your car insurance is under HIP (Honda Insurance Package) you could actually call them for a free tow/flat tyre change? i never knew that. (although a friend did mention that she tried calling before but nobody picked up) i guess i was lucky, after giving them my details i waited for them to send someone to rescue me. it took almost an hour for someone to arrive, and then it took some extra minutes for the technician to locate my car, haha (the mall has so many entrances and exits ok). luck also had it that i was not parked on an inclined surface, else i wouldn't be able to replace the tyre.


my spare barely had enough air in its tyre (hadoiiii what else could go wrong laaaaa) so i had to stop and fill er up on the way back. made it safely home after the ordeal, a few hours late than i had wanted to.


the next day i drove to my trusty Kedai Papan to see if i there was any way i could salvage the tyre. but with a nail that big and long, say bye bye tyre T___T. nvm, my tyres were about due for replacement anyway.

behold, the culprit of my heartpain and agony!!! :O


the current tyres on my car were Michelin but since one tyre alone was too pricey, i decided to get Bridgestone instead. i asked my friend whether Bridgestone made good tyres or not, he simply replied, 'ok. masuk F1' . 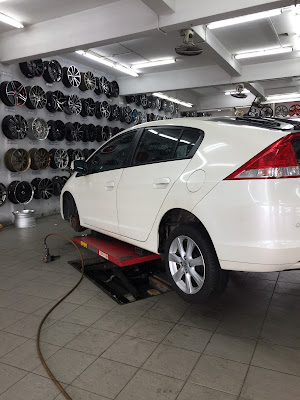 well, that's my tyre story. now i have two new front tyres, a much lighter purse and a very relieved heart hahahahahhaha
from my rose garden, E`n1x at 12:18 PM