one fine morning, while kakak was cleaning out the kitteh's cages, one of the kittehs went missing. so she thought fine sooner or later it'll get hungry and come back right?

no visual, no peep out of that little fella.

so in the evening we find the bibiks unfolding the industrial ladder to climb up the side of the roof to see for any signs of that darned cat. she even called the security guard to come help them.

he didn't manage to see any lost kittehs up there... but he did help uproot a stray tree growing through the cracks in the wall on the roof. LOL.

he was like sooner or later it'll get lonely and start meowing for company... so no need to worry lah.

i half contemplated that it might have been swooped away and eaten by some random eagle bahahahahahaha. i even checked the pool, you know, just in case it fell in. kittehs don't randomly disappear without a trace.

well, remember the last time when those kittehs got lost down a drain pipe? it wasn't random, they just got unlucky, those ones.

come 2am, the husband got hungry. so i went downstairs in search of food. and heard a lonely kitteh meow outside.

T_T. i should've just let that stupid kitteh be.

so i went out and went to investigate and saw it sitting by itself on the porch by the side of the house. i guess she probably fell off the roof. it ran and hid when it saw me. since it was dark i couldn't see a thing so i went back inside to get a flashlight.

she was wedged in between a cardboard box and the wall, trying her hardest to blend into the wall paint. she looked as if she thought she had invisibility super power, i seriously wanted to laugh at the sight.

but that idea completely left my mind moments later. why? that saiko cat went all kungfu on me lah. i tried to umpan her out with cat food, you know, since she might be hungry and all, but noOoOoOOoO when i tried to grab her by the scruff of her neck, all claws appeared and the slashing began. OMG!!! *(&#$*(#%*(#&$(*!

and i dunno how it happened but she managed to sink her teeth into my index finger. and clamped down HARD. as in OMG A NEEDLE IS PENETRATING INTO THE FLESH OF MY FINGERRRRRRRR oh how about MY FINGER IS STARTING TO FEEL NUMB ITS ABOUT TO FALL OFF and she absolutely refused to letgo even after shaking her hard. WTHHHHHHHH 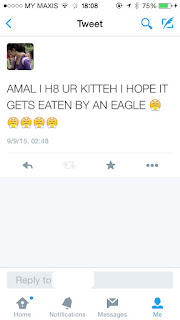 all i could think and feel was PAIN PAIN PAIN PAIN shooting up my finger. i miraculously managed to free my finger and returned her back into the cage (more like throw her in) with her siblings. all the while cursing the little devil. grrrrr grrrrr.

my finger, meanwhile was beginning to swell like a balloon. the bite was really deep but didn't break the skin, so i gugled up kitten bites and came back with alot of articles that can make you paranoid - cat scratch fever of the sorts T_T; that it can lead to an infection; and you need an injection from the doctor if you want to live. wait whaaaaaaaat? O_o


after reading all that, i immediately slathered my wounds with anitseptic cream. kakak suruh rendam my finger in boiling hot water + garam to get the bisa out. pastu dia picit-picit to get the circulation going OMG OMG hell that hurt too. but my finger felt slightly better afterwards. it took THREE freaking days for the swelling to go down ok. the cuts are still itching, and i think my once lovely hand will be scarred for life. no thank you, stupid kitteh.

these kittehs need more love, i guess that's why they're too hostile hahahaha

bil has happily named her Autumn Dr. Evil, while the other siblings are christened Snowball, Snowflakes and Summer (the prettiest of the three, only because she has markings on her nose).

Snowflakes and Snowball are up for adoption, any takers? i think they're roughly about 2 months old dy.


if you wanna know if that person is a cat lover / owns a cat, check their hands for telltale signs of scratches. unless they're a victim like me hahahahhahaha