on Saturday my friend invited the kids to her three dot's combined birthday party at KL bird park. luckily Waze got me there in one piece, i actually don't know where the bird park is, hahahah. to me birds are beautiful, but they're boring and they love to poop (ahhh marah la semua burung2 kat bird park tu). i didn't even know you could hold parties here, check out the link to some of the packages that they offer.

i thought it would be an interesting experience for the kids to go to (and they seemed bored out of their minds staying at home all day) so i woke them all up early and off we went. the party was scheduled from 11am-2pm, if you're late you'd miss the quick tour in the bird park.


bibik followed as well, so i opted to bring the stroller so that Sophia wouldn't wander about like she always does. the event was held in a separate area, away from the official bird park entrance. i'd have to say, getting to the event area wasn't really stroller-friendly, it was stairs, stairs and more stairs all the way. at least the bird park helpers were helpful enough to lug the stroller down the stairs, and up again, haha. next time i'm just gonna stick to babywearing, thank you.


with kids involved, it was difficult to keep to the schedule, so the large group of us strolled through the park in our own pace as we made our way to the Amphitheater, where we were given a fantastic display performed by the birds themselves. the show started at 12.30pm. as usual, my mushroom of a kid never seems to smile for the camera T__T.


after the show, we all headed back to the party, where the kids gathered round to sing happy birthday - three times haha - and the parents got to stuff their faces with food. the food was nothing fancy, but it was catered to suit the kids (and whatever they eat, the adults can eat too lol). my kids are ridiculously picky-eaters, so i was kinda glad they were smitten with the sausages and nuggets. oohh and the birthday cake was lovely. there were like three different types of birthday cakes (one for each kid haha): chocolate, mango cheesecake, and victoria buttercake. the mango cheesecake was so ohsem, i ate the whole thing myself =P~~~~.


oh and there was a quick photo session with the birds. each kid got to pose for a photo with the birds. i'd never thought Dayana would be brave enough to do something like that, especially since the birthday kids themselves were scared of the birds (and i was especially afraid of mascots when i was younger, remember that A&W Root Bear? -___-) but she was all up for it. you should've seen Dayana pose with the birds, complete with one on top of her head (haha!) *clap clap* she told me the birds were heavy, that's why she had to hold her arms up high macam strong woman. she received an awesome party pack, even i wished i had gotten one LOL. 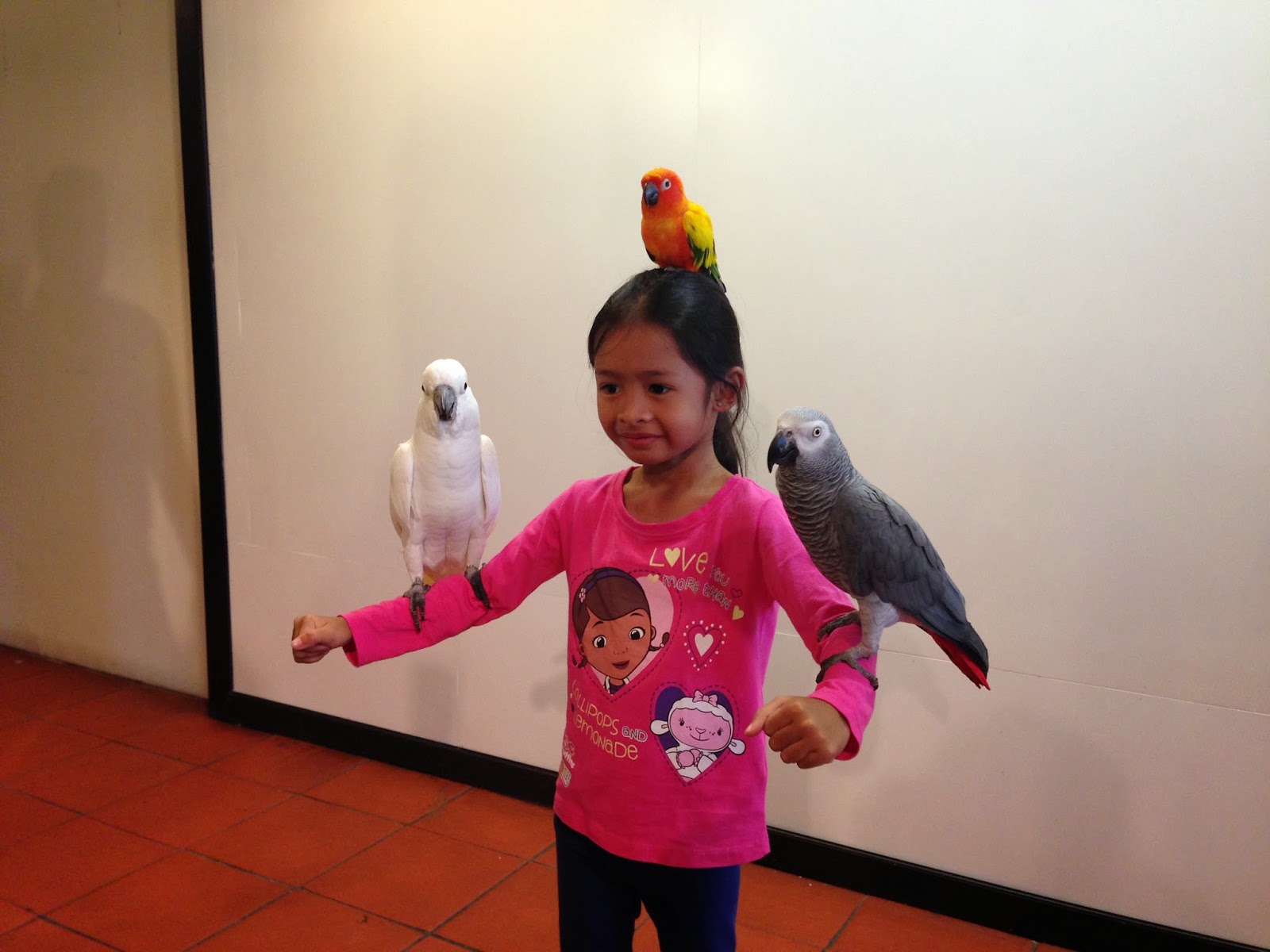 and the best part was, even Dinara wanted to have a go at it *blink blink in disbelief*. i kept asking her 'are you sure? are you sure? cannot cry you know' and she kept nodding and said, 'nak macam kakak'. i didn't know whether she was excited for the birds or for the party pack, mommy pulak yang berdebar2 haha, i kid you not. but she didn't flinch one bit when they told her to hold up her arms for the birds to perch on. i haaad to laugh because she was so busy concentrating that she forgot to smile for the camera, HAHAHAHAHHAHA. 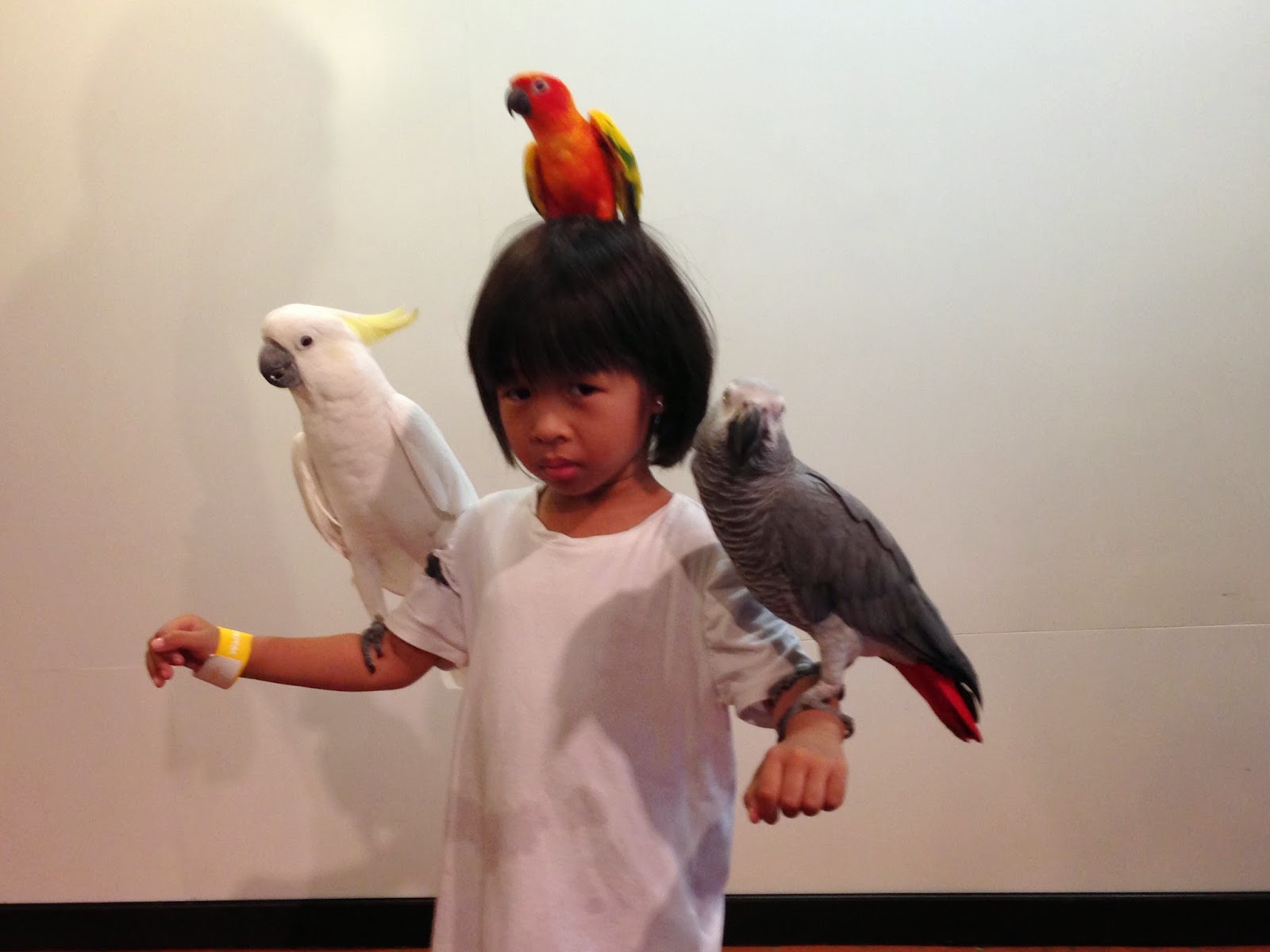 but i had a great time at the party, even the kids were happy too, although Dayana did ask me if she could go jalan2 lagi after that T_____T. thanks for inviting us =)
from my rose garden, E`n1x at 10:22 PM