my outlook has been having some sort of problem, it keeps restarting itself each time i click on something in outlook. had my pc sent over to IT, but they don't seem to know what's wrong with it either.

so in the meantime lemme show you my new makeup remover assistant. 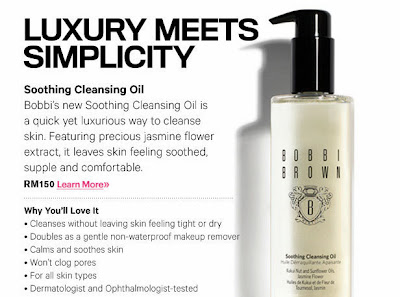 it works wonders, you. simply double cleansing or triple cleansing with my normal Olay foaming wash doesn't work. for tougher areas (read: the eyes) i'd use a cotton swab and baby oil, but that would only leave my face feeling oily. i tried nano white clarifying cleansing milk, but i felt like my face still had a layer of makeup even after all that washing and scrubbing. i also found an old bottle of Maybelline makeup remover for eye and lip in one of my cabinet drawers (gosh i seem to have alot of junk accumulated in there T_T), but i didn't like how my skin felt after using it. i have another makeup remover i bought from Elianto too, but i don't have any reviews for it simply because i actually forgot i had it. bahahahhahah.

ok so reet tells me that she swears by Bobbi Brown's cleansing oil (the one with the pump mechanism), which also doubles as a makeup remover. Bobbi Brown's not a new brand to me, i've tried out their compact foundation and pressed powder many years ago. i've tried stalking the counter with hopes that they'd produce one in a smaller bottle one day because i couldn't see myself finishing one bottle before the expiry date - no dice. so one day Significant Other decided to get it for me, yay! however by now its price had increased by rm10, tsk. mind you i'm not much of a makeup junkie so whatever beauty product i use/try is either within a certain price range or by recommendation.

(oh adrin i bought that Soap & Glory scrub you recommended =P too bad it's currently on a boat somewhere heading towards Malaysia haha).

i thought i'd end up with an oily face after using the cleansing oil (dah nama 'oil') but boy i was wrong. the salesgirl told me to massage 3-5 pumps of the oil onto my palm and rub it all over my dry face, then only add water and massage gently before rinsing. don't expect it to be foamy, it was kinda like spreading oil over your face, haha. i had doubts about this until i washed my face clean. oh my no trace of oil on my face. even the thickest layer of my foundation was washed away. sukaaaaaaa! my face felt so clean *jakun sementara*. you can use this product as a daily facial wash (although i'd think twice about that each time i remember how much it costs).

it did mention that it might not work as well with waterproof makeup, but i haven't tried to prove that statement yet since all my mascaras have dried out.