have grown up alot. 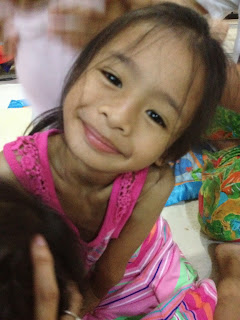 we were worried d1 was behind in reading so after talking to Nedd during raya haji (congrats third time mommeh!) we headed over to MPH to buy a bunch of Peter & Jane books for d1. thanks to Daddy's teaching (and in her excitedness to be able to read back to us with no mistakes) in less than a week she's covered book 1a and 1b. hoh she was so excited to show off her talents to Atuk and Tok Ami last Saturday, she insisted i brought her book along during family lunch at kgns and gave a three-time rendition to her grandparents and Angah. Ashu and Pak Cik, just you wait, your turn next, haha.

she still fights with her younger sister though. people keep saying, oh girls don't fight as much as boys do. i reckon them wrong. the other day they were fighting over some petty little thing, and so... 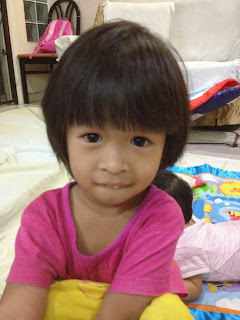 for d2, we bought a few Kumon books for her to work on. at her age d1 could already work her flashcards, something d2 hasn't mastered yet. even though she'd only be starting school next year, she's been having difficulty in pronouncing words, it's kinda like she's sucking a sweet in her mouth when she's pronouncing the words back to us. she can understand us, but we sometimes take awhile before we can understand what she's trying to tell us.

remember that LeapReader pen we bought for d1? d2 would imitate d1 (by means of observing) by pointing the pen to the individual words in the book and repeating after the pen, although most of the time she'd be enjoying the sound effects the pen makes by pointing at various places in the book. she does this only when i leave her to her own means, leaving her alone to explorer the book all by herself.

daddy is better at teaching d2, if she's with me her mind would wander away 90% of the time. the other day i found Daddy teaching d2 the 1a book, with d2 willingly repeating after her Daddy. see? she can learn if she wants to, she just think Mommy's someone she can joke around with, grrrrrrr.

she is obsessed with Barbie i tell you. i found her screaming her head off this morning because she couldn't get Barbie on youtube and bibiks didn't know how to do it for her. 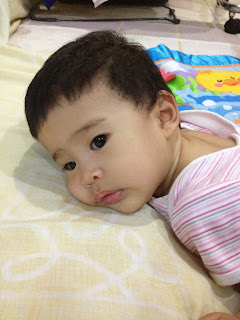 i affectionately call her Pia now, haha. she would draw up a fuss most of the time we brought her out so instead of calling her Dira, we call her Sophia now, just for the fun of it. Daddy wants to call her Princess Sophie, like that character in Leverage (kewl show which ended too soon). we called her Sofia the First one time and d1 scolded us, saying, tu bukan Sofia the First lah, tu Dira Nur Sophia! T__T

what can she do now, you ask? she'd get on all fours and start swaying forward and backward. some kind of pre-movement before crawling, perhaps? she can succussfully cover the whole floor perimeter by just rolling, sometimes inching forward like a caterpiller due to her strong legs.

she's fascinated by the tv. or perhaps bright colors. she loves staring at her playmat, even sometimes talking to it. she will always look in awe at her sisters, provided they take the time to stop and chat. oooh, and lately she's been blowing alot of raspberries tu, ni mesti kerje the Daddy nih. where else would she have learnt this skill? bahahahah.

the older two people:
decided to revamp the room. since we couldn't increase space, we had to make space. so two new additional closets were added to the room, in addition to a new freaking heavy tempered glass study table, i think i overstrained my back lifting weights *&*&#$&*^@#. in the process we had to throw out alot of stuff because the furniture needed floor room - a great way to do forced spring cleaning. cons: store room's full, i have no idea where to keep some of the stuff we simply took for granted. sigh. i hope everything will be back to normal this week. i've already managed to misplace my hairbrush amidst the jumble.

would anyone like to buy a used computer table? can let go for cheap. PM me!
from my rose garden, E`n1x at 5:05 PM