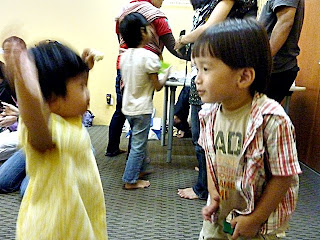 punya la excited sampai end up being a blur
i just had to post this photo in my blog! sungguh kiut oh. i like it when Dayana gets to mingle with other people her size, lol (fraternizing with oldies, yours truly included, doesn't count). sungguh excited until she ended up being a blur.

the cute little future heartbreaker is Farrah's eldest. kawaiii desu!!! (i curiek this photo from her blog).

i just wish she didn't look soo tomboyish with her short hair.

yesterday while waiting for her to unwind for bedtime she demanded to be placed in her crib. mau pulak she nak masuk crib, dulu each time i put her in she'll sense that it's not a good thing and demands to be brought out again. since she isn't sleeping in it anymore i've tossed all her stuff toys and all her pillows and bolsters dunno what other junk in the crib.

anyway, once i placed her in the crib she decided to spring clean and longgok all the toys and stuff at one end until she managed to empty out the other end to make just enough room for her to baring. haha. sungguh kelakar. she did sleep for a while in the crib after the lights went out, but she woke me up not long after so i brought her to the bed to sleep with me.

baby #2 has been doing alot of kicking lately. i'm guessing it's because i've been sneezing so much the past few days, i end up jolting the womb around too much, much to the baby's annoyance. haha.
from my rose garden, E`n1x at 6:13 PM

aww so clever make space for herself :D

lol. maybe i should take a photo =D