my Neo bullies me

today i woke up wayyy early with the hopes that i can arrive and leave the office early... only to find out that my stupid 3-year old Neo cannot start.

the engine's been making this ticking noise each time i try to start the engine for quite some time now. i guess today is the day it decided to just... die.

all dressed up and nowhere to go... and i've got some stupid defect to finish. someone is gonna kill me.

(ok so to be fair, i haven't gotten the chance to threaten my car yet. but with my green notebook yes, i already had thoughts of replacing the book with a smaller one in my head. perhaps the notebook unconsciously knew so that's why it simply disappeared. perhaps it sprouted legs and ran off as fast as its tiny legs could carry itself. hahahaha).

updates for the week (December 3rd):

1. my battery apparently according to the mechanic is unable to 'simpan cas' anymore so i definitely have to replace my car battery... sigh. funny that a couple of my friend's car also started having problems, both driving Neos. lol. is it normal for them to get 'sick' after they turn three years old? lol. even my Dad's and brother's car had problems in the same week @@.

2. i found my stupid green notebook! it fell behind one of the big boxes in my room. luckily Significant Other wanted to rearrange the furniture, i would've never thought of looking there. #*@*(#&(*@&$. and sorry, i don't even remember placing the book anywhere near to where i found it. hahahahahhaha. i've transferred most of the stuff in the book into my new mini book. from now on i'm lugging the small book around instead =D. my deskmate wasn't surprised, judging from the current state my office desk was in.

me: u know what? i hate you. hahahahah
he: apa ni tetiba? tak puas hati jom la gaduh
me: jom jom. esok we fight, i hate u coz i dah found my notebook =P
he: x de hal. esok kat board room kul 12. kalah kene minum air rebusan notebook. 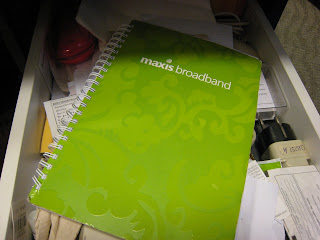 the notebook that went POOF for a while
3. i finally acheived the rm800 target at Mothercare! thanks to nobody but Significant Other, of course. i had a rm400 hundred receipt from the safety gates we bought last time, and needed another rm400 to get the membership card. so the day my car died, we sent the battery to the mechanics to see if it could still be salvaged, and headed over to The Curve to get the babyden mil was pestering us to buy. for a babyden cum safety gate, it really is quite stable, lol. just our luck, they were having a sale, so we got that and everything else for quite a good price. 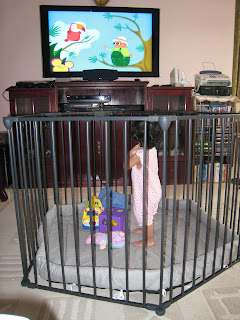 her new Babyden... no need to worry about her wandering towards the staircase which poses a big hazard no thanks to poor design
and we bought an Ikea high chair for Dayana. her walker is officially retired... now i need to find out where the maid campaked it. the things is, if you unintendedly leave stuff lying around in the house at a place it shouldn't be it'll soon be declared public property and will POOF not too long after. sigh. i need my own storeroom. the maid loves to take things without asking whose is it first. it's really annoying. but i can't keep everything in the room, it's practically a mini condo already! (minus the kitchen of course).

4. had lunch with my in-laws and the rest of the family at Spring Garden! last minute plan. had to ditch the Kenny Rogers lunch that very same day. i noticed that Malay will order differently from Chinese. what my mil ordered that day was totally different from what my Chinese colleagues ordered the last time i had lunch with them here (i suspect we non-Chinese have no idea what to order due to their complicated names and such hahaha). Nor and company went to see New Moon after the lunch. i've been hearing on the radio on how Robert Pattinson and Kristin Stewart make lousy main characters. kekeke. but i have to admit they make a gorgeous couple. i can't help but hate that Bella character. my colleague watched the movie yesterday, and is now officially angau over the werewolf Jacob. lol.

5. i got a 2010 planner from my insurance agent. the planner color is a shocking red. lol. but i prefer my greeny Pett planners. been using them for two years now =D. although for me it doesn't function as a planner, but rather it's where i keep track of what i did and bought each day for that particular year (since i'm Miss Forget-Me-Not). really useful sometimes when i wanna recall the When.

Honey said...
Hey Lilly, I've found out what the problem was with my Neo - faulty crank sensor. -_- Cranky much?? yeesshh.. pls jgn samakan with the owner. HA-HA :p

So yeah, spent RM500 including the 2-time towing *cry*

p/s: i'm in the Jacob team too fo' sureee =D muahahaa.... the shirtless scenes were so unnecessary but hey, who am i to complain? 0;p

oh really? for mine, the battery totally was at fault. so i had to fork out rm245 for a replacement. n this doesn't include the minor service that's already overdue!

jacob looks young la. if he has an older look about him i'd go for him in a split second =P