remember the birthday prank i played on my deskmate earlier this year? well my friends decided to continue the tradition even though we're in lockdown and stuck working from home.

their initial plan was to sabotage my car, or something like that. but nah, that ain't happening, office tutup. lucky for me, too bad for them.

they got creative and decided to send the surprise to my house instead. no one is safeeeeeee


you know that mco joke where they say now's a good time to go kutip hutang, coz confirm everyone will be at home? yeah well... that's how it was more or less.

funny thing was, they had to send the surprise one day before my actual birthday, only because the courier service is closed on Sunday hahahha. so i received alot of early birthday wishes this year. i seriously did not expect this. i was just told to make sure i was around on Saturday. and in my total surprise (i was stunned i tell you, STUNNEDDDDD), i did not realize the mascot was a cat, and not a mouse. 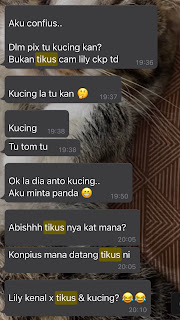 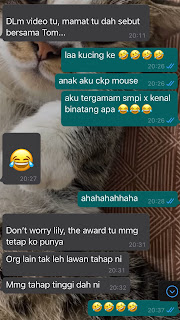 btw, the cake they sent me sedap gila. here's the number in case anyone's interested in ordering:


on Sunday, i had brunch with v at VCR. v's a pro at cafe hopping, so her recommendations doesn't disappoint. i found out that doughnuts and ice cream go perfectly together.


v also had the bright idea to order from kak od her infamous salmon asam pedas and kek batik. so of cos i pun nak la menumpang sekali, heeee~~~~ huwaaaaaaaa i miss random makan-makans in the office. now to figure out how to pass all that to v. why la you live so far away from me?


ended the day with Sushi King with the family and berry pavlova from Alexis. the husband had already bought an early birthday gift for me about a week ago. my old device died on me, and as much as i'd like to revive it, it's time to move on and move to greener pastures =P.


also, a good friend of mine decided to surprise me with this slice of cake. thanks babe! love u mucho =D 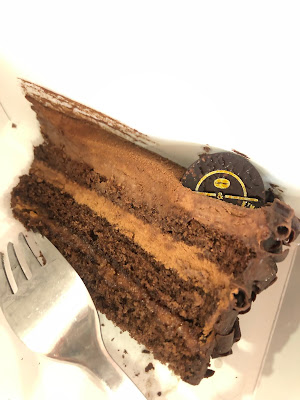