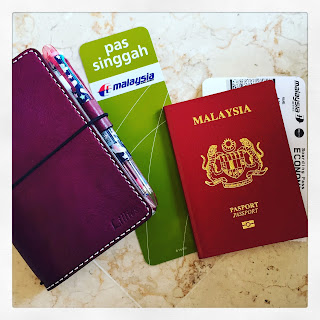 my third and last day in Jakarta. my flight leaves for KL at 1545pm. Mashi was to stay on another day and return back to KL the next evening (good luck Mashi! =P)

our plan for the third day was to visit Tanah Abang to check out more kain. and i was hoping to find a batik shirt for my brother. so we woke up early to maximize the morning hours available before i had to pack and leave for the airport. our stay was inclusive breakfast; we had to forgo the day before in favor of our Bandung trip.

breakfast was served on the 4th floor of the hotel. in addition to the usual western breakfast, nasi lauk was also readily available, lol. in Dayana's DST school subject, rice for breakfast is a big fat WRONG but i ain't complaining, hee~


on the way to Tanah Abang, Mashi got abit jakun to see green people on bikes whizzing on the roads. have you heard of Go-jek? the taxi driver tells us that's it similar to Uber, only motorcyclist-style, a service that offers not only just transport, but courier and go-mart as well. or maybe it's similar to Go-get, i have no idea. anyway, ade beran? especially on Jakarta roads, lolz. i told Mashi to give it a try after i left for the airport. adventure sikit! bahahhahahaha.


you can get lost in the maze of stalls in Tanah Abang. the last time i was here was in 2009. all the kains were located at the lower levels of the building. see all the lovely batiks? cantikkkkks gilerrrrrrrrrr!!!


we found softer lace here as compared to the one Mashi purchased in Bandung, but they were selling it for 150K per meter (i already added them to my wishlist =P~) immediately asked Mashi to fast fast get married so we can #buyallthelaces and plan our next trip to Bandung haha. there was this one gorgeous beaded lace selling for 350K a meter. that one's PERFECT for tailoring a wedding outfit. cantik gila.


despite having a tight schedule, we managed to experience riding this vehicle, haha. it took us as far as Gambir Station. from there we had to take a taxi to get back to our hotel.


i had to stop by Kuningan City Mall first because bibik made some last minute requests for local medicine.

since i had luggage allowance, we spent my last few minutes in the hotel trying to cram everything into my luggage bag. i remember Mashi laughing at me for bringing my wheeled luggage (she backpacked to Jakarta). see how that bag finally berjasa in the end? in fact, i should've brought bigger luggage, hahahahah. tak muat ok, 3 pairs of telekung, 4 sets of kain, 2 shirts, a boxful of Kartika Sari and who-knows-what-else. i brought back the heavier stuff, she brought back some of my lighter stuff since she only had a 7-kg allowace (itu pun she complained her bag was heavy lugging it around the airport lol).

according to the taxi driver, the traffic (macet) usually starts to build up after 2pm-ish on weekdays, so it might take you slightly longer to get the airport. it was already 1pm when i left the hotel, the journey took me 45 minutes to get to Terminal 2. you had to pay 9K + 6K in toll fees, plus the taxi fare of 145K.


there wasn't much to do at the airport so i checked-in my bag and headed for the departure hall. the only things i got here were a couple of souvenirs for my sisters. thinking back i should've just bought them some lace in Bandung. oh well, maybe next time.

the aircraft for my return flight was an old model, so no in-flight entertainment for me =(. their safety briefing video was given via monitors that folded down from above... sigh. so i was literally mati kutu for the next 2 hours, lol. luckily the seat in between me and the other passenger was empty.

the Commander of my flight happened to be the very same Captain that cleared the husband for his final line check last December. excuse me for my slight jakun-ness, but i get a little bit excited whenever a tech crew's name is familiar to me, even if i don't know that person at all haha.