i was unwell that day - technically i still am - but the husband wasn't around and the kids were getting antsy due to the long holiday of doing absolutely nothing (apart from playing the ipad as long as it had battery life and sleeping late at night doing goodness-knows-what T_T). so i decided to bring the kids to Jumpstreet. a few of my friends have been there but i was a bit skeptical on whether the kids would be entertained or not. i remembered asking Dayana awhile ago on whether she would be interested in jumping around. she gave me a big fat NO. hahahhahahahhaha.

so without thinking much i bundled up the three elder kids into the car and drove to PJ. Jumpstreet was situated nearby to Jaya One rupanya - where i always get my washi fix at Stickeriffic! lol.

we went during off peak season; entrance fee was RM22 (gst included) per person per session, free for children below the age of 3. but we had to purchase their Jumpstreet non-slip socks at RM5 per pair. if i ever decide to bring them here again, i must remember to bring along the socks. 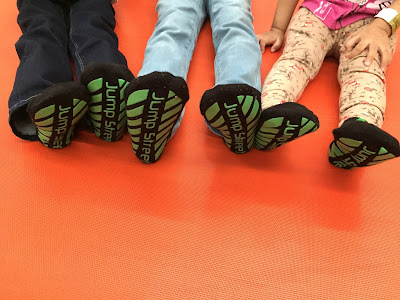 each session lasts for one hour, which starts and finishes at the top of the hour. we arrived just in time for the 5pm session. at this hour there were barely any one else apart from us and a couple of other kids jumping around. we didn't have to bump bodies with other people! =D 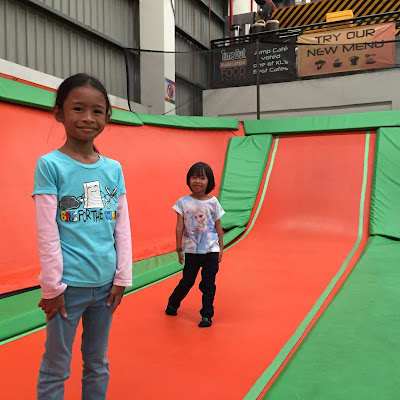 i thought Sophia would enjoy jumping around, i apparently was wrong. she wasn't used to the trampoline, and of the ripple effect of others bouncing all around her. she was initially terrified! lol.


but she eventually got the hang of it and started 'bouncing' around all by herself without any difficulty. i took a few videos of her but haven't uploaded it yet. the other two, on the other hand, started bouncing all over the place.

The Cage was a dedicated area for kids below three, to be accompanied by a paying adult. so we spent most of the hour here, while the other two occasionally explored The Foam Pit - a pit filled with thousands of soft foam cubes, and the Slam Dunk, where you could dunk basketballs, of course.

when time was up, guess who didn't want to go home? LOL.

i'm wayyy to old for this. i ended up with a splitting headache for jumping around too much, hahahhahahahah.

oh, the kids made a new friend, i think his name was Benjy. here they are posing at the mandatory Jumpstreet wall together: 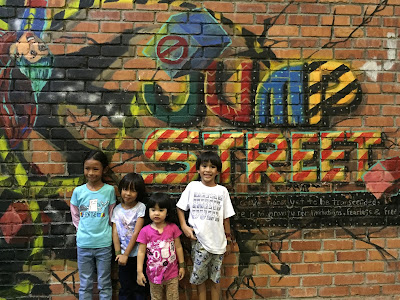 and since we were so close by to Jaya One, we decided to stop by Boat Noodle for a quick bite. did i mention that Aunty Daisy followed us too? she came as a spectator of course. LOL.

i left the kids at Boat Noodle and dropped by Stickeriffic to purchase a Christmas-themed washi for my December layout. i couldn't find any Christmas themed stickers though =(. i didn't know Reet wanted the same roll of washi too, i just touched-and-go because the store was gonna close at 7pm and didn't want to drag the troops along.


still another month of school holiday and i'm out of ideas on how to entertain the kids. haha!