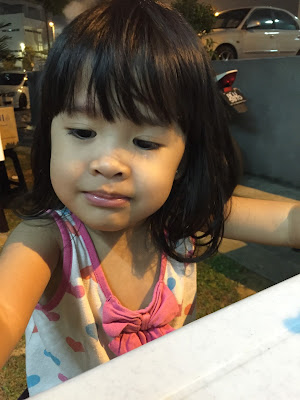 "Sophia, where are we going?"
"i dunno." with full conviction.

this is whenever she wants something by force. with hand gestures.

doing something that warrants my attention persistently especially when i am in the middle of concentrating on something else.

means: hug kiss. requested each time before going to sleep. when i mean sleep i mean finally spacing out after too much iPad at 3am T_T.

Dayana and Dinara are both labelled as this. lol

both bibiks have been christened this name. apparently the other bibik's name is hard to pronounce. 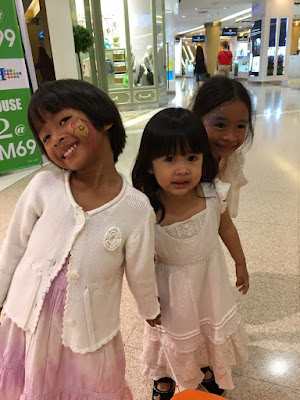 i remember me trying to teach her how to say her name (so-fee-ya) awhile back. later on whenever we say the word "so?" with Sophia in the vicinity, you could hear "so!" being echoed out of nowhere, haha. that's our little parrot.

so yesterday we tried asking her to repeat a few words after us. yesterday during our family outing at Pyramid i realized that she had trouble pronouncing 'balloon'. she loves balloons. she could spot on distances away.

(warming up with words that she knows how to pronounce).

whaaaa...? the elder two burst into fits of giggles.
after numerous tries, we still couldn't get her to pronounce balloon correctly.
balloon was still ba-mum.
oh well... maybe next time, lol.
from my rose garden, E`n1x at 5:35 PM