the long journey to Praha

so it's my turn to leave on a jet plane. i was lucky to have Miss Makeup and Mister Bus Driver send me off. the staff behind the check-in counter thought i was a foreigner (i should change citizenship to Thai haha).


it's my first time flying with Lufthansa, it was the cheapest flight i could find (second was Emirates but that would've cost a whopping 3k+). my first leg of the flight took almost 13 hours to reach Frankfurt. i had a two-hour transit before my next 1-hour flight out to my destination.

can i say that i prefer Oman Air over them? you'd think that for a long haul flight, they'd supply you with some sort of small toiletries bag to freshen up with during the flight. heck Oman Air did. even Significant Other got one from Etihad. Lufthansa? nada. just the normal pillow, blankie and headphones. fufufufufufu.

the food was... er, so-so. i'm not usually picky over airplane food (i look forward to them actually haha) but the food served on my flight... kinda sucked. they didn't even have some sort of menu to warn passengers of the food options they could choose from. i ended up with some weird dish which i forced myself to swallow because i did not wish to get gastric on the flight. breakfast was slightly better though. 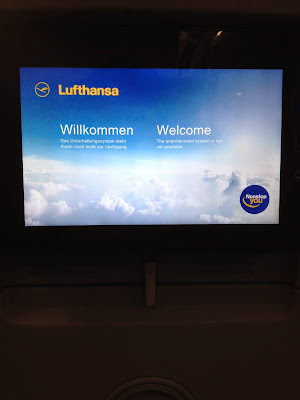 i got a middle aisle seat so that i could happily get out to pee whenever i wanted (legroom in economy is so sempiitttttttt). i occupied my time by sleeping and watching two inflight movies, Bad Neighbors and The Fault In Our Stars. so ok i finally caught up with the tfios bandwagon, haha, but the movie didn't wow me that much. ironic that the two main characters also starred together in Divergent.

strangely, most of the passengers on the flight was Indonesian. i shared a whole row with them.

we were about a half hour behind schedule, because of high traffic during takeoff. and so i arrived at Terminal 1, Frankfurt around 7am or so. passport control lanes were congested with hoomans, you'd be surprised at how many flights get in so early in the morning. and then i had to find a toilet, haha. Frankfurt airport is HUGE. and when i say huge, i mean my transit gate was at the other end of the airport -_______- i had to go up and down a couple of levels, and go through this looOoOoOoong underground tunnel just to get there O_o.


we had to board a bus to take us to the A321 parked on the tarmac. you can see the Lufthansa logo practically everywhere left, right, and center (where are all the other planes??? hah). i got an aisle seat again, so no staring out the window for me :\. they served us this 2-in-1 plain yogurt + cereal for breakfast (which i found out later was available in abundance at their supermarkets).

so i landed in Terminal 2, Ruzyne Airport around 10am. unlike Significant Other i did NOT see that paradise sign. haha.


and it was FREEZING, at 18 degrees Celsius (updated: ok i was exaggerating, biasa la minah tropics lolz. Prague when i arrived wasn't as cold as when i left it ok - which was around 10 degrees Celsuis? hahahaha). i still remember Significant Other's words to me: travel light, don't need to bring many winter clothes, tak sejuk mana pun, or something along the lines of that. ish. in August and September the weather was still ok laaa. but in October winter was approaching, and the temperature was slowly dropping too. thank God i didn't ditch all my turtlenecks, they really were a lifesaver. i guess that skirt and long dress i brought along were out of the question =P.

so... welcome to Praha! we're like 6 hours behind from Malaysia. excited? very. exhausted? extremely =D
from my rose garden, E`n1x at 11:56 AM