for about 2 weeks, i had been searching high and low for the eye Dayana had purportedly lost after she removed Mr. Potato Head's body pieces one by one and deliberately threw them all around the room, but to no avail.

i kept thinking to myself that the missing piece will eventually turn up, judging from my track record of being able to find what i'm looking for - but note the word eventually, lol (i can happily search things for you, but i can't guarantee you when i would find it haha).

i gave up looking for the eye on purpose (as in don't want to waste my life after crawling on my hands and knees looking under furniture proved to be futile) because if i think i did keep looking for it, i might just burn the eye when i find it simply out of sheer irritation *kita bako!*

anyway, earlier this morning i was busy looking for the kids's Belle figurine that they had misplaced yet again (sigh, story of my life). i searched under the beds and among all their other toys, still no Belle. was just about to give up when SQUEEEEE!!! i found the eye! (i have this habit of finding things other than the one i'm looking for) hidden under our tv table amongst Significant Other's chess set, a bunch of cobwebs and coin boxes. how it ended up under there was way beyond me T___T 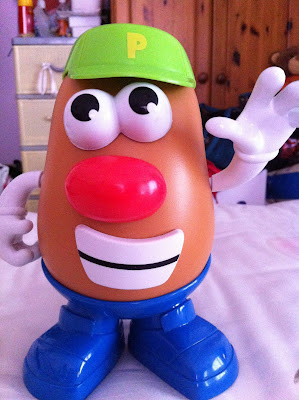 yo. me Potato. who you?
oh back to the search for Belle. i kept pestering Dayana to help me look for it, but as usual she ignored me. although sometimes she'd help me look but i'd end up having to deal with double the mess than i began with, so fine. hmpph. the kids were cranky so i told them to round up their bottles and blankets and bam in front of the tv in our room. Dinara went to her room to get her blanket and you know what? when she came back, in her hands were her blanket, and BELLE.

apparently she found it while i couldn't. hebat. and knowing her she won't be able to tell me where she found it in the first place. hahahahah. or was she the one that purposely hid it from me? O_o

and you know what Dayana did? being dissatisfied that her sister found it and she didn't, she grabbed Belle from Dinara, left the room, and then came running back saying, 'look Mommy, i found it!!!' while brandishing the toy in my face. 'it was in the pillow, Mommy!'

adeh. the concept of finding things clearly has no impact to her. sigh.

for the kids' lunch i took Dayana downstairs to make macaroni. she enjoyed stirring the macaroni, tossing in the crabsticks and cheese into the mix. i was out of minced meat though, phooey. i didn't know how it tasted like since it was fasting month anyway, but apparently Dayana seemed to like it. she practically finished the whole thing and almost had none left over for her sister. she was soo happy she'd go, 'look, Dayana masak!' to anyone who had ears. 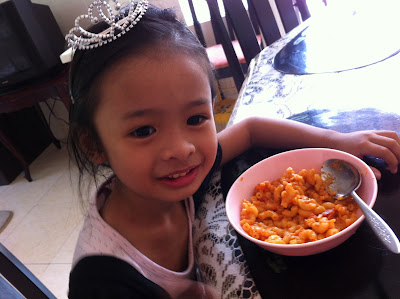 the happy camper. tiara tu, tak boleh blah.
maybe it's because she made it herself that added on to the yumminess of it.

or maybe she was just plain hungry, hahah.

a few quick stuff on mek Dinara:
- loves to eat on her own. and she's not yet even 2. Dayana never showed any interest to spoon feed herself until she had a competitor - her younger sister.
- i find it amusing watching Dinara watching tv. she'd go 'uh oh!' during certain parts of a movie, or 'oOooOooh!' during others. HAHAHAHA. she seems to have a slightly higher attention span than her elder sister. her current favorite movie: Despicable Me (the only movie i am able to watch over and over again thanks to those minions. have you ever watched them on youtube? so funny).
- cries her eyes out whenever i walk out the front door without her. i forgot when Dayana outgrew this phase. but at least she doesn't cry when i leave her to take a shower.
- calls me 'ma-mei'. calls her Daddy 'ma-mei' too. and i thought Daddy was easier to pronounce than Mommy? @_@
- if we give her a drumstick to munch on, and if she sees a bowl of dip in front of her, she will automatically want to dip her chicken into the bowl, then suck on the dip. ni keje Auntie Enn nih. at one point she kept dipping her chicken in chilli sauce and barely realized it was hot. hahah. hampehs.

hari2 Dayana has been asking me for a Barbie girl birthday cake. who knows anyone who can make one? we think we're gonna celebrate their birthday on a small scale this year.

on another note, i need to justify why i should keep this. i have too many purple already. 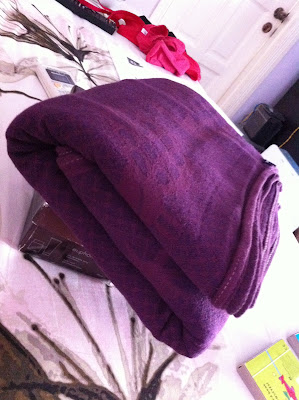