i was fortunate to be able to attend the company's company dinner that was held last weekend. i could also bring a partner, so i dragged Significant Other along. theme of the dinner: Masquerade Ball, so we had to come in masks else suffer the consequences of wearing a paper bag on your head.

knowing small companies like this one, the word 'formal' will definitely be misinterpreted from its actual meaning, lol. when i asked the guys what they were wearing, they said they were going in jeans. jeans???? but ok lah, at least they said they were gonna wear long sleeved shirts, to 'formalize' the look. haha. i say this because if you ask an established company like EY, their interpretation of formal is going all out on black tie formal. lol!

judging on how ugly my bony legs are, i decided to go with floor-length so the number i was wearing would be my very first purchase in 2011 (TSF would rank a close second haha). decided on a color apart from black (although i wished i'd bought black, but this means i have an excuse to hunt for an LBD in the future =P). so i did my hair up (with Dinara in tow thanks to my psling), and left Dayana overnight with her grandparents so that i didn't have to worry about her getting in my hair.

i actually didn't have to worry about being overdressed. it was a mixture to formal + semi + plain psychotic. heck, we even had Beckham among our midst, hahahah. a number of ghosts + ghouls were present too. bad enuff that i haven't had the time to get to know the people in the company yet, not being able to see their faces just made it a bit more confusing. earlier i didn't have an inkling as to where Park Royal was situated in KL so it was our luck that we happened to see it after the SMART exit, and we arrived just in time for the end of the speeches before digging into the buffet table =P.

i remember a year ago when masks were scarce i helped a friend of mine get a mask for his masquerade ball, and i remember it was quite costly. i got our masks from Teddy Tales. there are some places that do sell them expensive though, and can also range up to rm200+. i told shisi you'd need to eat, sleep and go everywhere wearing the mask in order to get your money's worth. lol. shishi's mask was nice though. if you rajin korek2 at sungei wang, you can get pretty lovely ones for a steal =).

all in all the dinner was ok. we were put into groups and the games began. Significant Other was put into a the same team with the CEO (heck i didn't even get to meet him prior to this!). we had a bit of fun, i even won something for the lucky draw! whee! (compare to my first company, i've never won a single thing for the past 5 years i've been there T_T). my current deskmate won Best Dressed. ehehe. 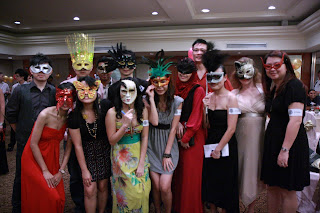 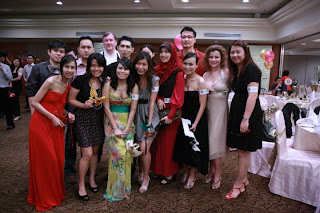 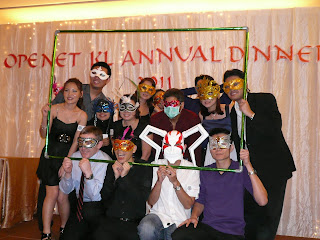 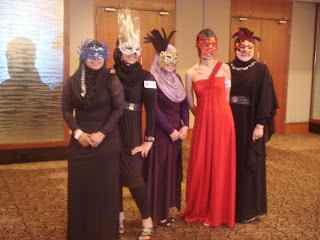 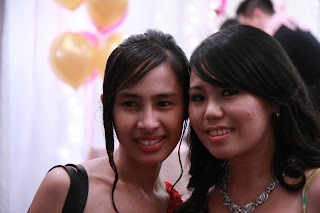 with shishi lol
after dinner we spent the night at SR just for the sake of soaking in the bathtub in our canggih bathroom. hehe.

aiyaa as i scroll to cari the picture but dont have .. upload pics :)

lol. sorry2... i lupe bawak my card reader =P. will upload after this hihi

:D all dolled up!
where'd you get the dress?

midvalley! the mannequin had been donning it at the window for quite some time and i kept passing by the store every morning on my way to the office =P.